WHY MAKE A GOOD IMAGE?

Images help not only to communicate but also to engage the audience and spread the word. Images are powerful tools capable of simplifying speeches and of teaching complex concepts. This is also true in Science. With our help, you will be able to communicate ideas in a clear and visually beautiful way. That is our mission. That is what we love to do.

Do you need an infographic, an illustration to explain a scientific concept, a representation of the microscopic world, a picture of the whole universe, or even beautiful backgrounds for a magazine? Come talk to us.

Are you a scientist looking for representations of your results and illustrations that summarize your findings? Or are you just willing to have your article featured in the cover of a scientific journal? We are here to help you.

We create any kind of 2D and 3D artwork for science communication. Come talk to us and don’t forget to take a look at our portfolio. 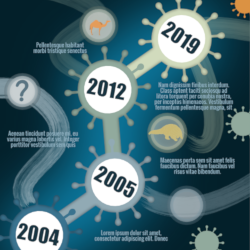 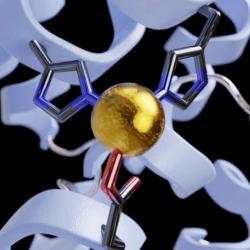 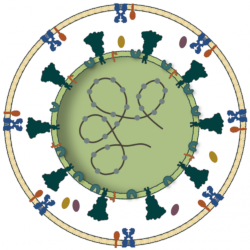 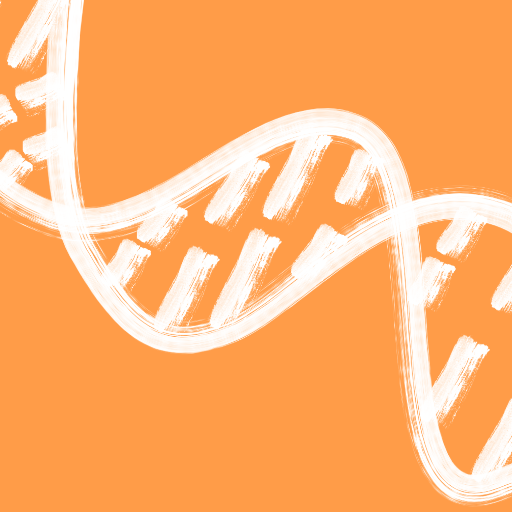 Our team is composed by scientists who became designers for a mission: make science more beautiful. We understand the importance of accuracy and clarity in science communication and our background help us to apply these concepts in our designs. After years of working for the advance of science, we are now willing to help others scientists to express their ideas in an accessible and visually beautiful way.

Are you are interested in our work?
Send us an e-mail.

Powered by the colors of science

Irving Geis was an artist that produced a vast amount of scientific illustrations in the fields of astronomy, biochemistry, astrophysics and others. Some of his illustrations became iconic images that are recognizable by many in these fields. He is known for painting landmarks in the history of science, like the drawing of the first tridimensional structure of a protein, a work that rendered a Nobel prize to John Kendrew. Dr. Richard E. Dickerson, a researcher that worked closely with Geis many times, once stated that "Irving Geis defined structural molecular biology in a visual sense. We have been following his lead—consciously or unconsciously—ever since".
Here we pay tribute to one of Geis most famous images: the illustration of the Cytochrome C structure (Dickerson, 1972). Long before the advent of computer graphics, Geis was able to imaginatively depict the details of the complicate folded structure adopted by proteins at atomic level. 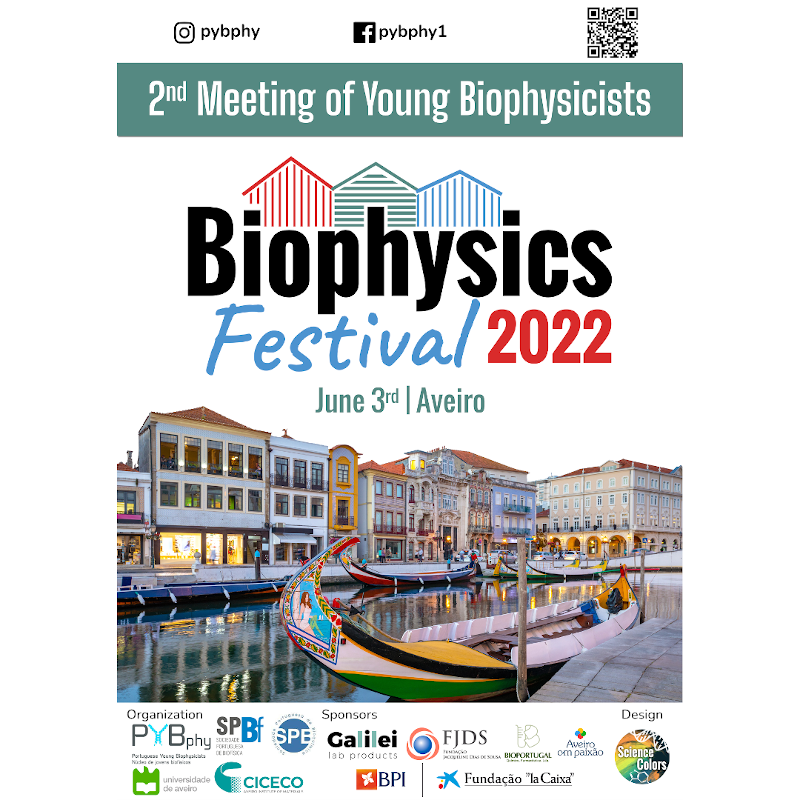 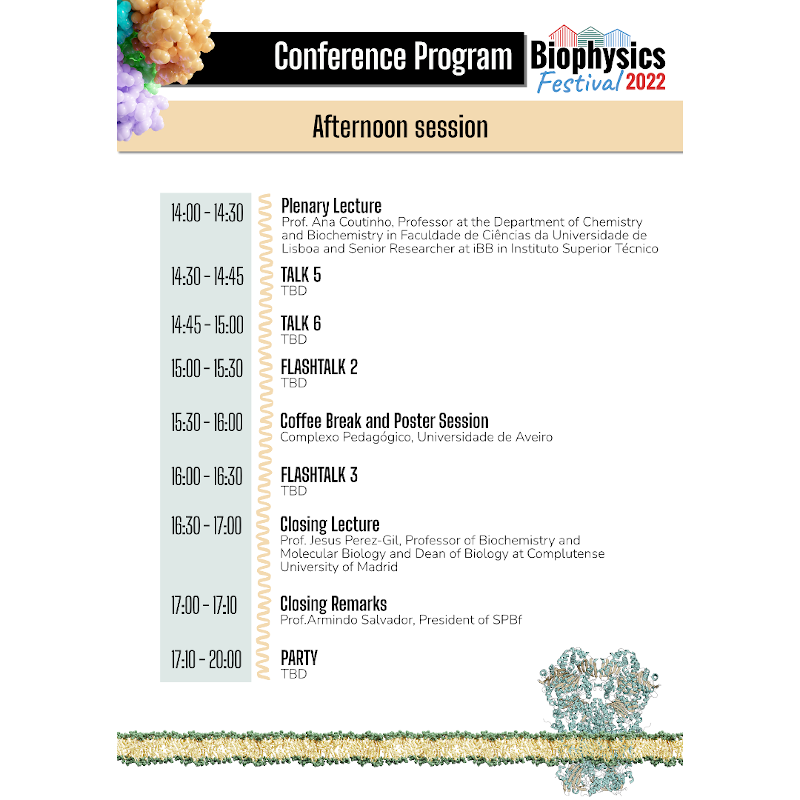 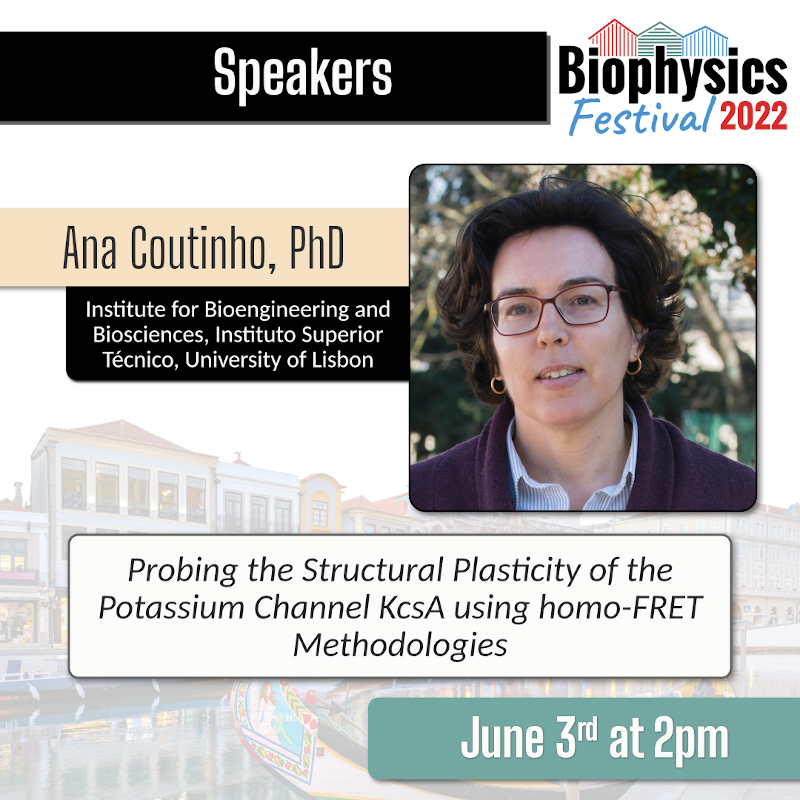 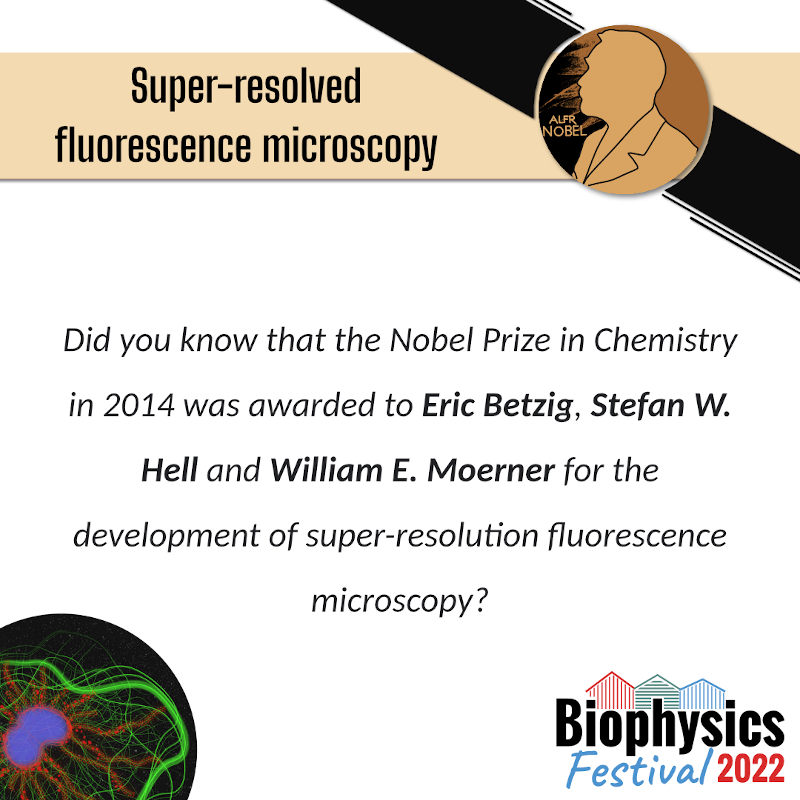 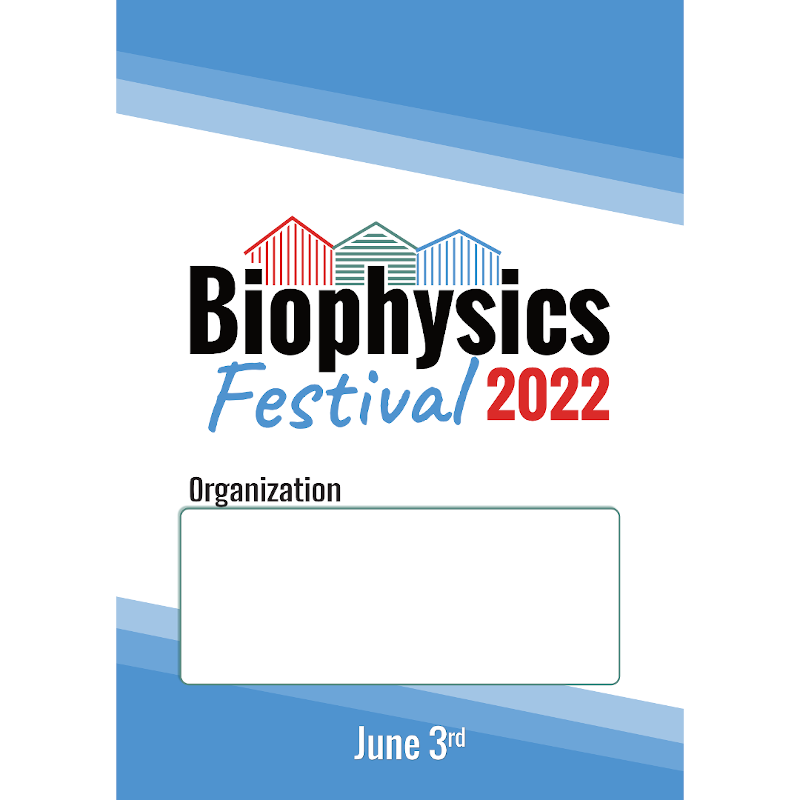 Designs for the conference "Biophysics Festival" that took place at Aveiro/Portugal in 2022. We made designs for their social medias, website, printed materials and also created the event logo.
Did you like it? We can help you on your next conference! 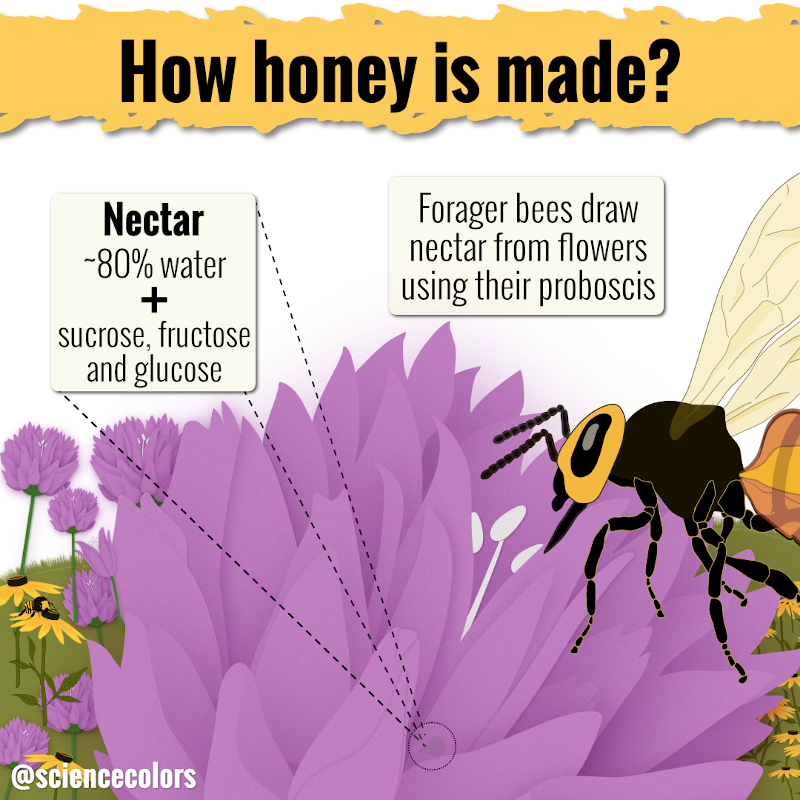 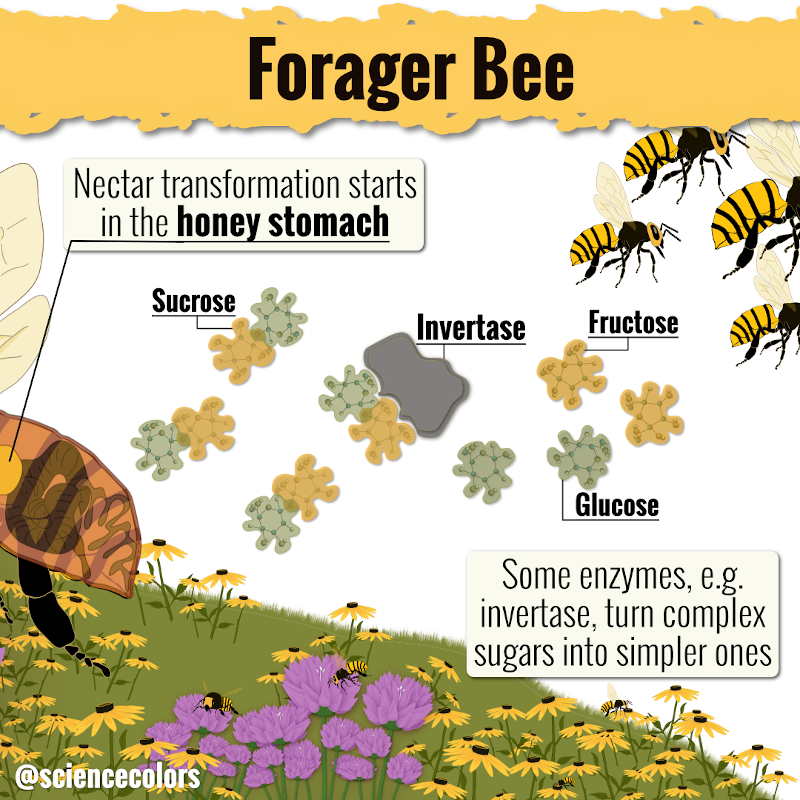 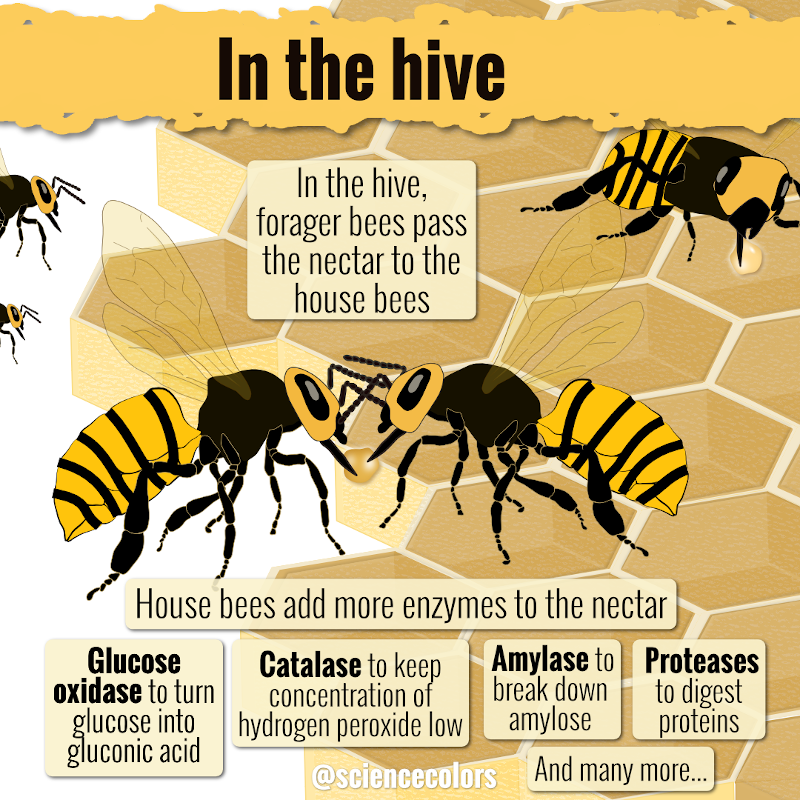 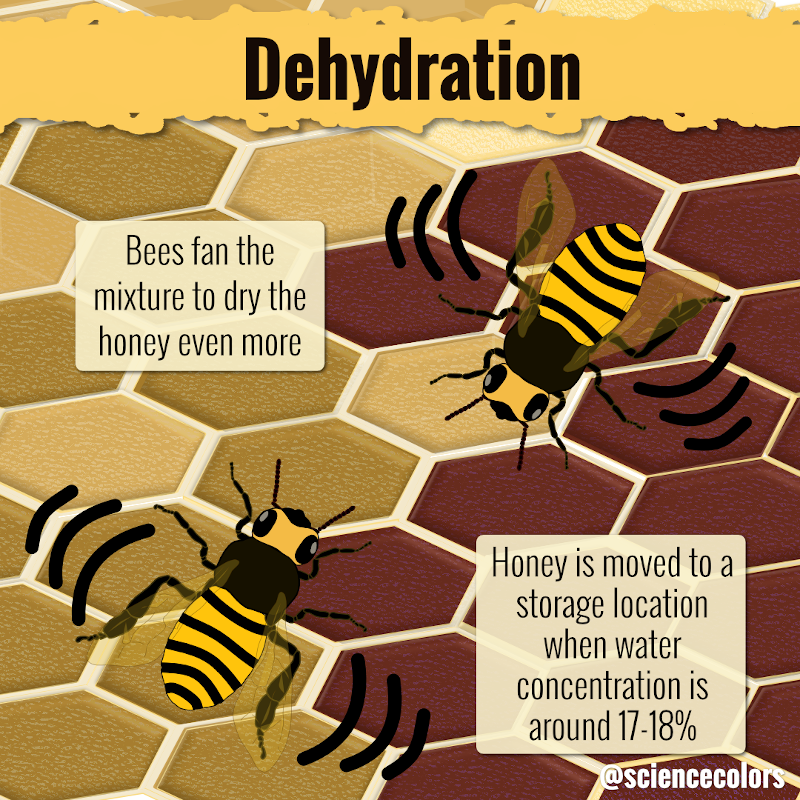 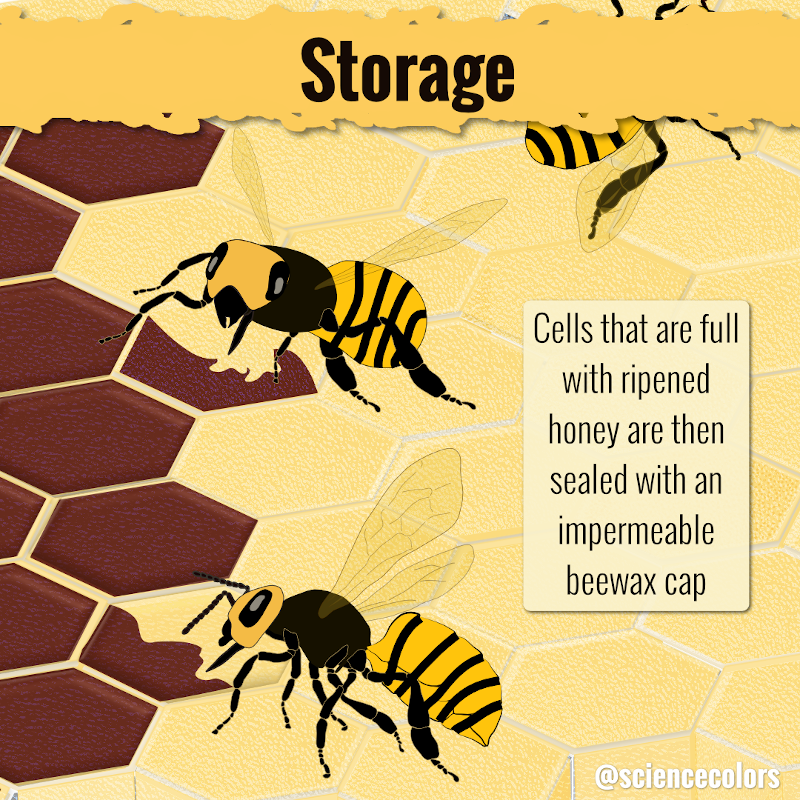 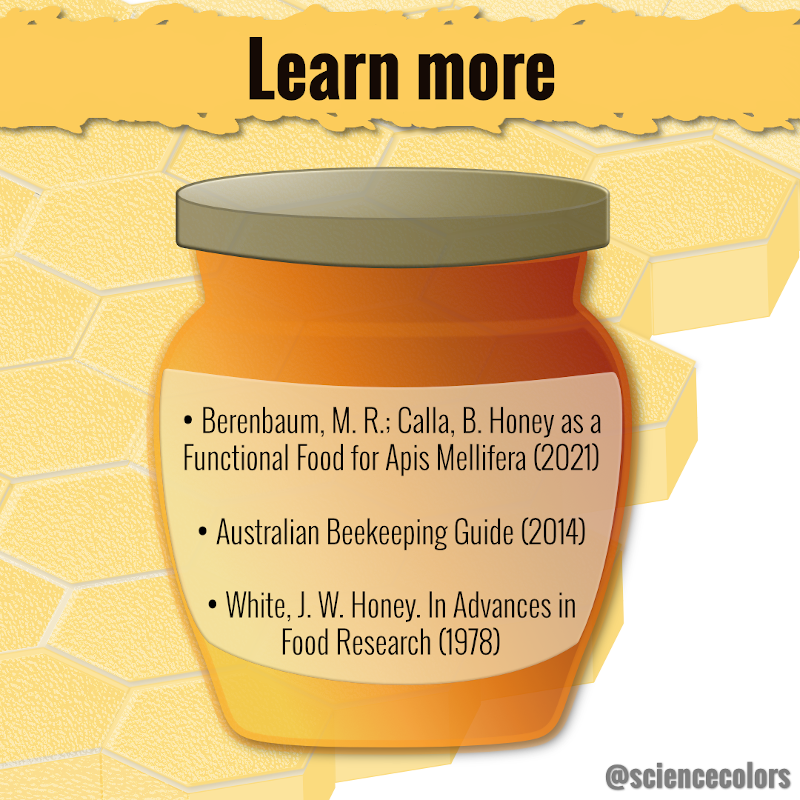 The sweetness of honey production

It involves harvesting, transportation, processing, packaging and even storage. It’s a true (bee)industry. 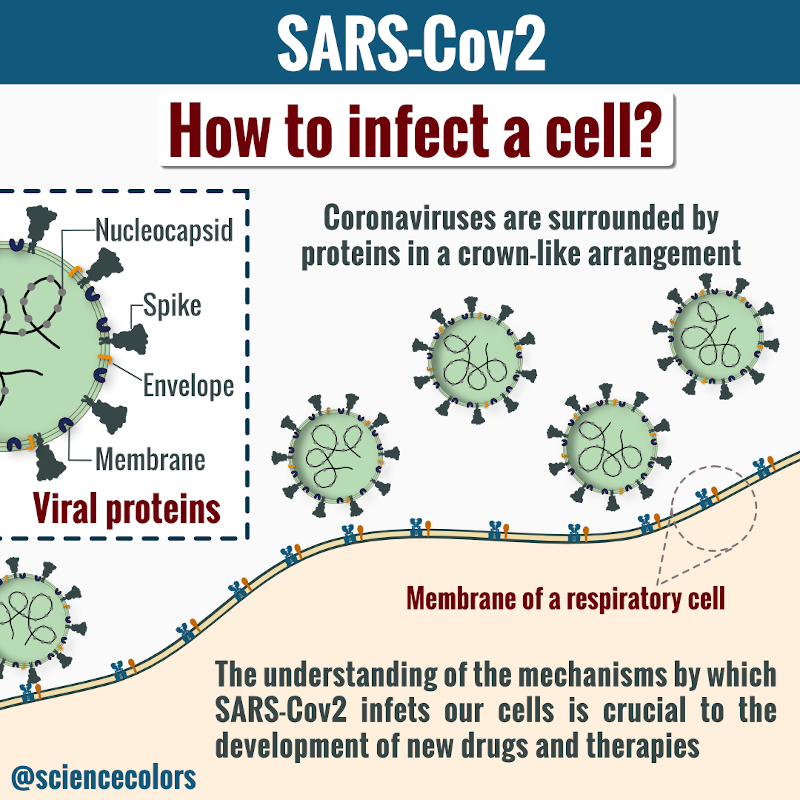 With the emergence of the COVID-19 global pandemic, scientists have been studying the mechanisms by which the virus SARS-Cov2 infects our cells in a chase to understand the disease’s symptoms and to find targets for new drug therapies.

Like other coronaviruses, SARS-Cov2 is a spherical enveloped virus composed of four structural proteins: spike, envelope, membrane and nucleocapsid. The viral genome is located inside it’s envelope and the spike protein irradiates all over the virus particle in a crown-like arrangement that names this group of viruses (coronavirus = virus with a crown in latin). 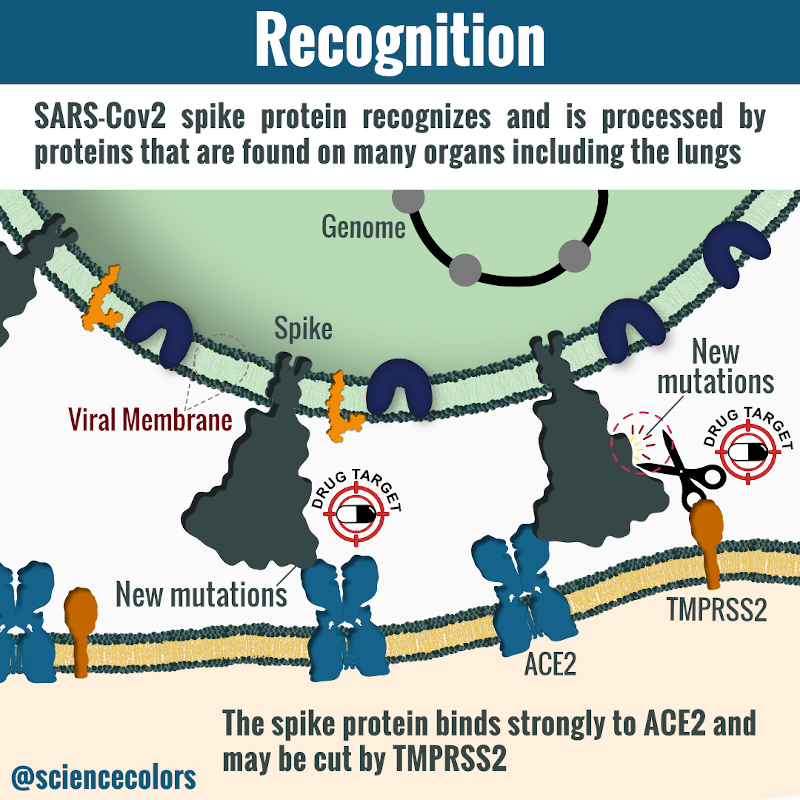 The use of the host cell’s machinery to produce new viral particles is a crucial step to viruses’ life cycle. To take control of the cell metabolism, SARS-Cov2 membrane has to be fused with the cell’s membrane in order to inject the viral genome into the cytoplasm. This fusion may occur in two ways, and the spike protein plays a key role on both of them.

The spike protein binds to the human angiotensin-converting enzyme 2 (ACE2), a protein found on many organs (e.g. lungs). The presence of an exclusive set of mutations seems to make this binding stronger than the one reported for SARS-Cov – the virus responsible for the 2003 SARS outbreak.

Another set of mutations also found in SARS-Cov2 let the TMPRSS2, an enzyme that is present on many human tissues, cut the spike protein in a way that prepares it to start the membrane fusion process. 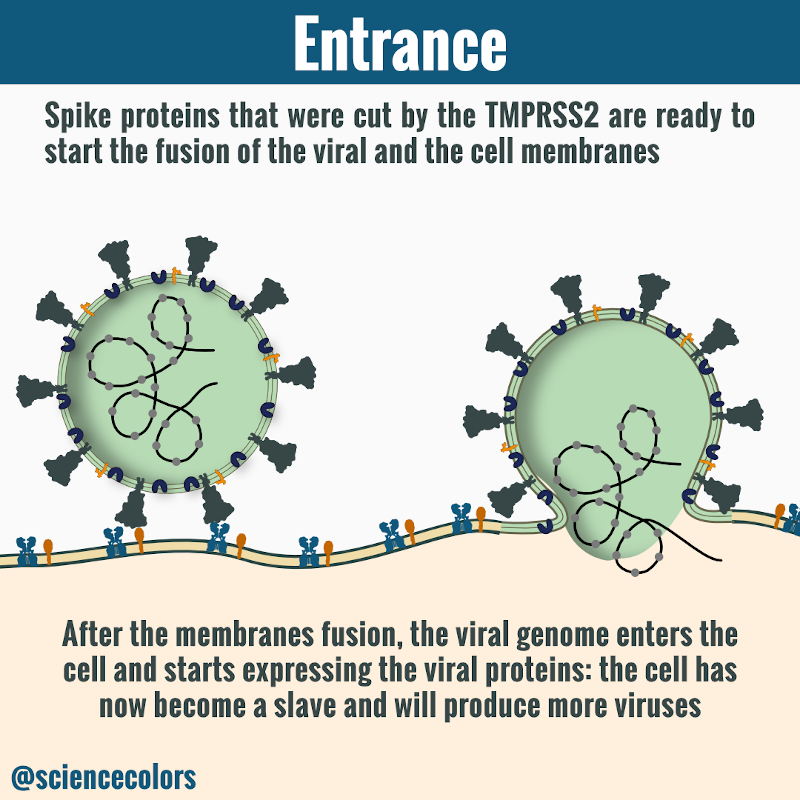 Once the fusion process ends, the viral genome enters the cell and starts expressing the viral proteins: the cell has now become a slave. 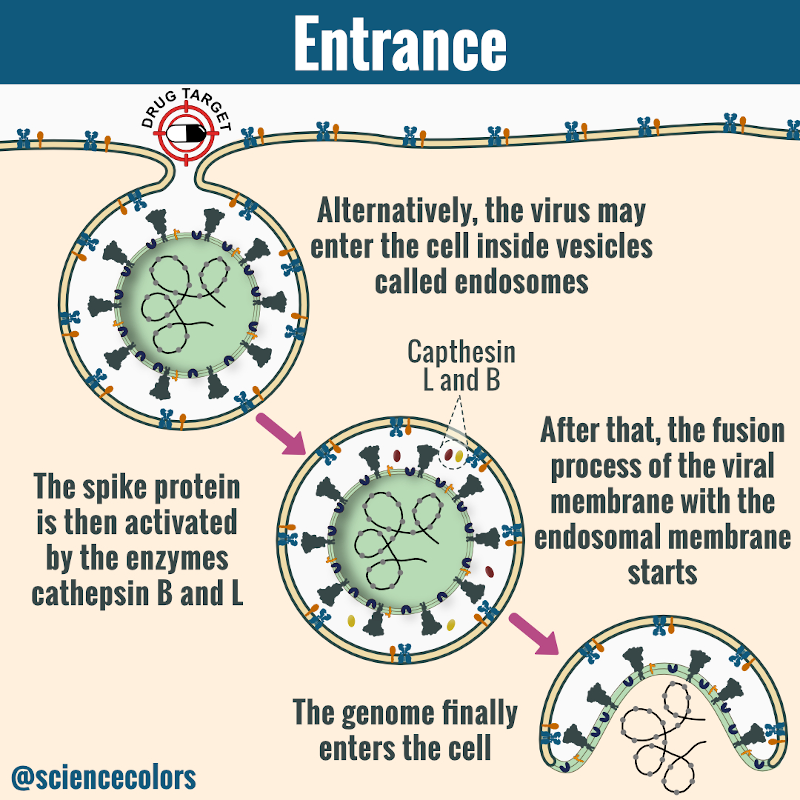 Alternatively, the virus may enter the cell inside vesicles called endosomes. The spike protein is then activated by two enzymes (cathepsin B and L) commonly found inside these vesicles. This activation triggers the fusion process, this time with the endosomal membrane.

The aforementioned steps are promising therapeutic targets for new antiviral drugs, vaccines or antibodies that may help fight Covid-19. 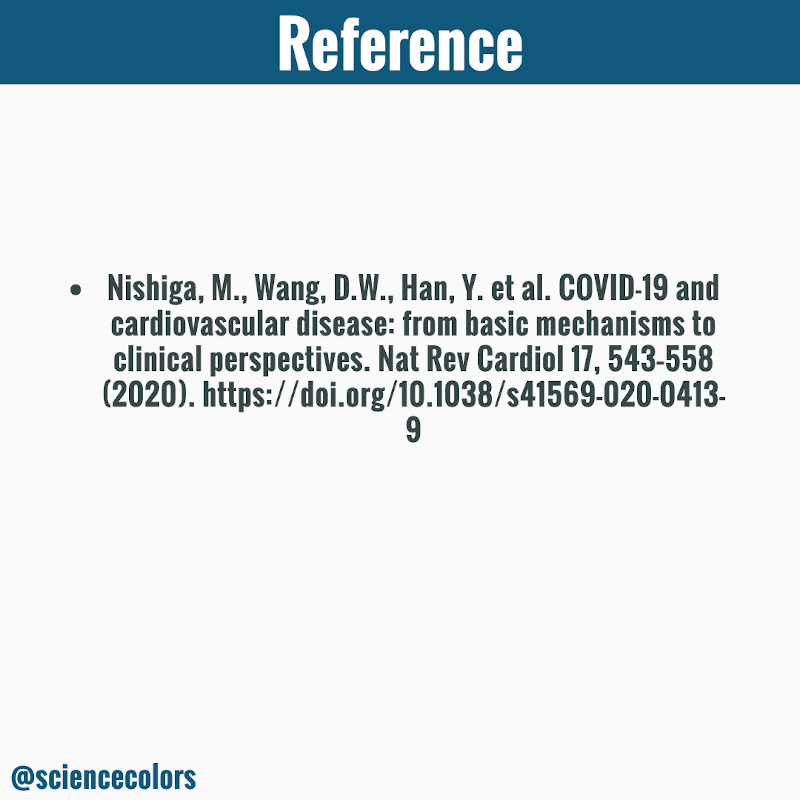